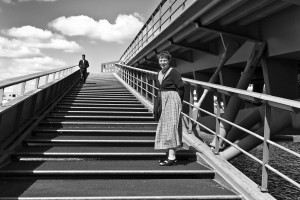 Dr. Tineke M. Egyedi is director-researcher of DIRoS. She does ongoing research and game development on how standards and regulation affect innovation. Her activities include a chapter published September 2017 in the Handbook on Innovation and Standards on a functional classification of standards (inner workings and effects; i.c.w. Roland Ortt), invited lectures (e.g. for a master’s course at the Tilburg Institute of Law and Technology), a study on the valuation of patents in standardization (Intel research grant; published), and a study on the constraints of standards, rules and regulations as perceived by people working in care for the elderly (Magentazorg; internal report).

Tineke worked as a senior researcher at the Delft University of Technology from January 2000 to March 2015. In that capacity, she collaborated on grants and projects funded by the European Union, Dutch Science Foundation, Dutch ministries (V&W and BiZa), companies (e.g. Sun Microsystems) and associations (OFE),  Next Generation Infrastructures Foundation (NGInfra) and standards bodies (IEC and NEN). She published in journals ranging from the IEEE Communications Magazine to the International .Journal of Hydrogen Energy. She developed online modules for two NGInfra MOOCs: ‘Inverse Infrastructures’ (DelftX: NGI101x), based on the book Inverse Infrastructures: Disrupting Networks from Below (2012)  she co-edited with Donna Mehos; and ‘Standards and Infrastructure Flexibility’ (DelftX: NGI102x), which builds on an NGInfra research project. In 2009 she initiated Setting Standards, a management simulation game developed i.c.w. United Knowledge and used by NIST for US policy makers, by NEN for training Chinese standardizers, and in university courses worldwide (safety science, innovation management etc.). She has held various positions and worked in different capacities. She is a former board member of the European Academy for Standardization (President 2005-2011) and currently, among others things, associate editor of the International Journal of Standardization Research (IJSR; editor-in-chief Kai Jakobs), fellow of the Open Forum Academy and expert to the UNECE WP on ‘Regulatory Cooperation and Standardization Policies’. She is regularly invited to lecture at conferences (e.g. Imaging technologies, Japan; Standards and architecture, Turkey; Computing and Solutions in Manufacturing Engineering, Romania) and universities (e.g. recently for 120 master students at the university of Tilburg; this included playing one of the games she co-developed with United Knowledge for the Danish Standards Body).